Following the 26 October remarks of Turkish president Recep Tayyip Erdoğan, Turkey started shelling heavily YPG positions in northeastern Syria, east of Euphrates using tanks and artillery. It first targeted the city of Tal Abyad (right circle in the map) and later the area of Kobane (left circle in the map), including the villages of Ashma, Selim, and Koraly. 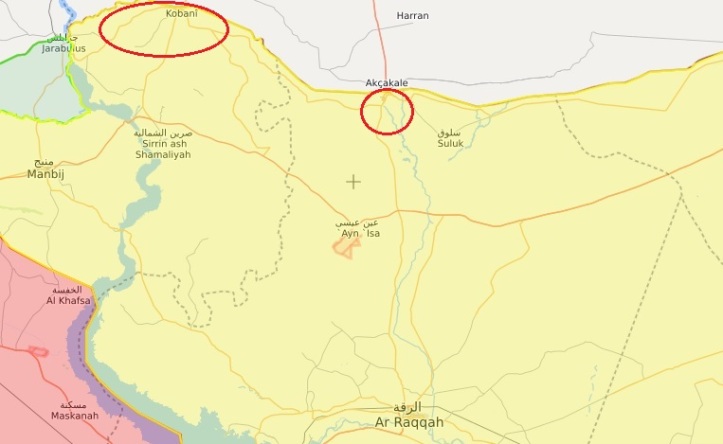 Over the past year, the analysts of Geopolitical Cyprus talked repeatedly about the growing possibility of Turkish military operations east of Euphrates.

Also important is the fact that both Turkish and US officials announced that there will soon be joint Turkey-US patrols in the city of Manbij.

It would be safe to argue that Turkey and the US are coordinating closely on developments in northern/northeastern Syria. Turkey seems to be exploiting the US’s effort to get closer to it and push it away from Russia. Provided that Turkey is willing to distance itself from Russia and work towards the stepping-down of Assad in accordance with the renewed American interest in removing him from power, it seems that the US will be more flexible vis-a-vis Turkish aims regarding the Kurdish-controlled territories east of Euphrates.

It should be noted that new complications in the province of Idlib and the outbreak of a conflict between Syrian forces, terrorist groups and Turkish proxies, could postpone Turkey’s plans for northeastern Syria.

By the Geopolitical Cyprus team